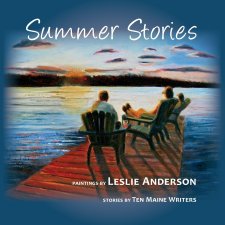 For the school carnival that Halloween before she graduated, she had dressed as imaginary i. Imaginary i as a Hollywood-style superhero in a cat suit, that is. Her body was long and sleek, her neckline lush, her face over-painted and carefully framed with an elaborate setting of her dark, springy hair. What was her mother thinking?
“Look, Mr. Charles!” she’d shouted, then flung her short cape over her shoulder. “I’m imaginary i! Now you see it—she pointed at the glittering rhinestone “i” on her chest—“now you don’t!” She let the cape fall into place.

Jenny tends to be startled by her own face in all those photos her friends take while they’re hanging out—who is that? She tries to recreate the twisty half-smiles, or the distance in the eyes when she stares at the mirror, just to see how it happens that she drifts away and becomes someone else, why it happens. What was I thinking about when I got that look? That it was almost lunchtime? The fight with Susan? She focuses again on the C in algebra but no, tonight, in her bathroom mirror, she’s just Jenny.
All these pictures of herself. She’s beginning to really see.

Jerry was counting pairs of shorty-shorts—a deeply sad fashion trend he’d hoped would never come back—when he heard the “Here you go” from the bangs-and-ponytail that had taken his order, and turned to claim the Styrofoam cup she had pushed through the window. The lady behind him was leaning forward already, reeling off syllables that should never go together, like fruit-a-razztastic-mallow-cuppa, or jamocha-choka-nanna-rama, plus she was talking sprinkles, whipped cream, chocolate dip. He made a chopping motion with his plastic spoon between their faces, and then, leaving the woman hanging in the middle of a nutty-caramel swirl or a fudge-mint streak, he pointed out that Bangs had given him the wrong ice cream.